It's time to start a new notebook for tracking my spending. That's right, I track what I spend. And yep, I do it old-school. In 2007 I bought a tiny, awesome notebook from my neighborhood stationery shop (remember those? the shop went out of business shortly thereafter after nearly 100 years in the same spot), and I resumed tracking my spending after several years' break. This time, the habit stuck! 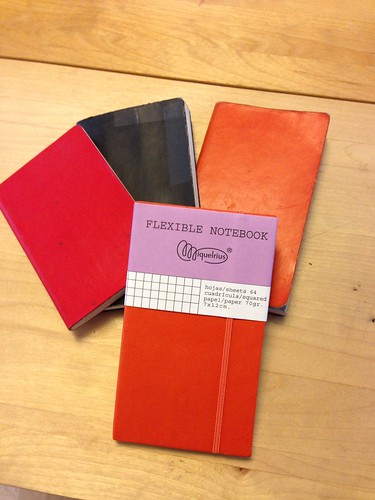 I know I tracked my spending for a while in the late 90s or early 2000s, but I can't remember what I did with the information, and I don't think I did it very long. I know I was inspired after a bout of reading Your Money or Your Life (highly recommend) but I  don't know if I got much out of it.

Perhaps I was in a better place financially when I started tracking in 2007. I know I started it easy: in June, I tracked grocery spending only. In July I added restaurants. By September I was tracking all my spending, as far as I can tell, and even started sorting it into categories. The categories changed a bit over time: by the end of 2007 they were: groceries, eating/drinking out, coffee out, bills, entertainment, gifts, charity, travel, transportation, clothing, household, upkeep/health, misc. In the intervening years I've added hobby (typically cycling and knitting expenses go here), booze, and house. (Household expenses are things like a new spatula or set of sheets; house expenses are things like a ladder or the yard guy.)

It's fun to look back and remember - at the beginning of 2007 I was just under 20k in debt, including grad school, my small car loan, and a credit card. In July 2007 my notes show I had 70k saved for retirement - more than my salary, and not bad for 36, but not super amazing either. Thanks to the power of writing things down, I can figure out by what percentage I've increased my salary (thanks, Past Me who negotiated hard during one promotion!), by what percentage my retirement savings have gone up (thanks, markets and Continually Diligent Me!), and by what percentage my bills expenses have increased (okay... you can't win 'em all). 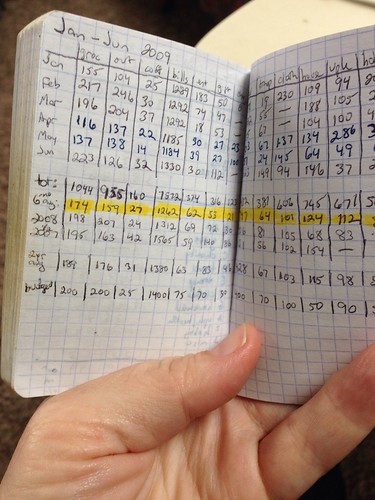 Anyway, those notebooks above represent seven years of data. I'd be really bummed if I lost one, but more importantly they represent a really great habit I've developed. Now I'm starting a new notebook and I think I'm going to adjust a little bit of the way I track things - large lump-sum expenses like for travel or furniture won't show up in the monthly figuring, just the annual, so my month-to-month spending can be a little bit more apples to apples. But I'm definitely busting out that book to keep up this routine!

p.s. I'm partial to using hard-to-find pocket-sized notebooks from Spain. Last time I bought three, and am opening the second. I'm kind of thinking about buying a few of the latest model to have as backup against the tragic day (...in six years...) when I log my last entry.