Tonight is the night I get to taste my limoncello! I even cleverly put the small jar of it in the freezer last night, so it should be the same temperature as the REAL limoncello I bought in Italy, lo those ten billion years ago when I was there in 2001.

I'm still working on the sweater... I'm about 2/3 done with the right-front side, which leaves "only" two sleeves and the assembly to do. (I've got zero intentions of knitting the belt that is in the pattern.)

What else? I've watched parts of many of the World Cup matches. I'm deep into the delightful world of the show Mad Men. I'm hot on the trail of making fig-infused gin. I might bake something yummy this weekend, and my neighbor and I are having an open grill on Sunday afternoon. Should be fun!
Posted by beth at 11:51 AM 0 comments

I've been working on some limoncello in my spare time. The beauty of it is that you assemble it and then forget about it for a couple of months. Easy peasy!

I used a recipe from a local blogger but made a LOT less - about 10% of her immense volume. I used some vodka that wasn't as strong as the one they recommend - the recipe calls for 100-proof vodka, but I had 80-proof and don't love crazy boozy stuff, so I went with that. woops! I missed a month in my calendar posts. (This may mean my brother hasn't changed his calendar in a couple of months.. sorry John!) May's picture is of crabapples in bloom at Edinburgh's Royal Botanic Gardens. My mom and I made our way there on our second day in Edinburgh. It was a little tricky for us to figure out how to get there - for some reason, my guidebook wasn't helpful, and neither was the person we asked at the train information desk. Turns out that's because it's not a train trip - we asked a cabbie how much it would take to get there, and he said it would cost about 6 pounds. Total deal! It was a partially rainy afternoon, and was a lovely place to wander. June's picture was from another rainy day (sensing a theme yet?) at Dunvegan Castle, which I mentioned in April.
Posted by beth at 8:48 AM 1 comments

Links to this post
Labels: calendar, june, may, Scotland, travel

I've been knitting a wrap sweater for a while now - I started it March 26. So far I've finished the back and the left-front side. I've cast on the right-front side and have knit about an inch. I love the color and the yarn. I'm not 100% sure I'll love the finished product, but at this rate, I won't know for months! A knitting-friend advised me to think of this as knitting five scarves, then sewing them all together. I admit it helps to think of this as 2 projects done and 3 to go, but I'm still estimating that I'll be lucky to be done by Labor Day!
Posted by beth at 8:29 PM 0 comments

So, I've been to New Zealand and am back again, somewhat caught up on my life. I realized I forgot to do my beginning-of-month calendar post for May and June, so I have a little bit of fodder to catch up on . However! NZ!

Here's where we went: 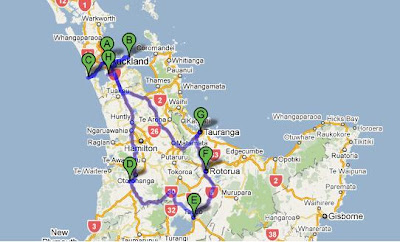 A - flew into Auckland and spent a full day there
B - took a ferry to an island off the coast called Waiheke
C - drove to a nearly-deserted beach called Whatipu, then continued on to
D - a teeny town called Waitomo Caves, where, yep, we went into caves.
E - is a town called Taupo - we soaked in a hot mineral bath followed by an amazing meal
F - and went on to Rotorua where we saw boiling mud and had another fabulous hot spring afternoon. On the last day we drove from F to G for lunch, then to H to fly back out of the country. F -> G-> H was a bit of a rush, but we made it!

Given that this is the whole country, clearly another (longer!) visit is required someday: 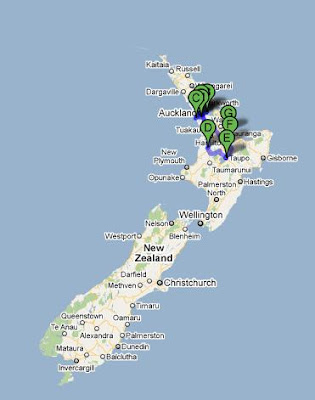 I'll post more pics later. Given my dearth of blog-fodder, I've got to stretch this out a bit!
Posted by beth at 7:52 AM 0 comments