I have a new thing! After helping with the quilt earlier this year, I decided it was finally time for me to learn to sew - on a sewing machine. I resisted it for a long time since I didn't have the equipment and didn't want another expensive hobby that makes stuff I don't necessarily use (see also: knitting - I have a LOT of hats and stuff... though I also knit baby gifts and love my knitted socks and sweaters; and I'm happy to have a skill to make something special for friends who aren't well).

But ... I decided to learn anyway after I enjoyed the quilting project. I don't think I want to make more quilts, but I wanted to know how to do it at last. My friend has given me the long-term loan of her dead husband's sewing machine, with the injunction to make him proud, so I'm equipped! I found a 10-week class at a local community college, and it's been perfect. Most of us had never threaded a machine or loaded a bobbin, so I fit right in. Pajama bottoms.. someday soon!
So far we've talked about the machines, about fabric, have done test stitching on a piece of paper to practice going in straight lines, and have pinned and cut out what will be pajama bottoms. I think next week we may actually sew some seams!

Now that I've got my toes in, though, I'm already trying stuff on my own. I made my very own cloth napkins earlier this week - well.. I made one so far: And I also sewed a tube of fabric, filled it with bulgher wheat and steel-cut oats (they were inexpensive/on hand) and some lavender buds from my yard, and made a microwave-able heating pad to drape on my neck and shoulders. Actually I made two of them - and I just love it. I've wanted one for literally years and finally have achieved it! And, in the back of my head, I've wanted an apron like this for ages, too: 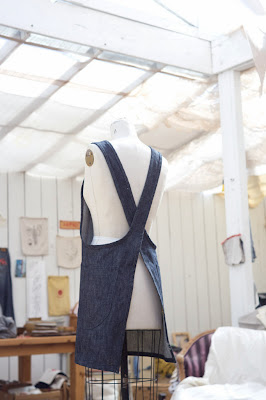 I like that it doesn't drape on the neck or tie in the back - easy on & off, but looks like it's pretty secure. I don't love that it's $88 but I realize it's sold at a specialty shop. Anyway, I want to make one like that. I had a hard time finding patterns at first, but got some help from a friend, and have found one that looks promising. And a couple of stores have fabric sales this weekend. So.. stay tuned, friends. I expect I'll make one based on the pattern that my friend found, and will then probably make some improvements on it. Fun!
Posted by beth at 4:03 PM 2 comments

At some point in the middle of the summer, one of my genius friends decreed we should plan to have a tomato festival to celebrate the end of summer. Early in September we made it happen! Most of us brought home-made tomato dishes, and one person brought drinks, and we drank repeatedly to our cleverness. The festa must be repeated!

We started with salsa: Then we moved on to my sister's offering, gazpacho: Then tomato salad - made with a surprising combo of water, oil, and vinegar, so it's soupy for dipping purposes: Then we had pasta with a POUND of brie in the sauce... (but it did make a lot!): And finished with my offering, a cherry tomato cobbler: It was probably as well we had no dessert, though we did ponder whether tomato ice cream, gelato, or sorbet might be good. Perhaps we'll find out next year!

One year, or seventeen

It's officially been a year since I moved back to Portland! It's also just over seventeen years since I moved here for the first time - how's that for a concept to bake my noodle (as the Oracle phrased it so well in The Matrix).

I'd had a few things I wanted to accomplish in the month of September, to round out my first year back in town. I did get a few bike rides in, and I went to an Oregon winery's tasting room (and bought a pinot noir), but I didn't make it camping. I had sites booked, and friends lined up to participate, but we wisely cancelled when we were hit with massive volumes of rain - and had a pizza and game night instead!

It's been such a full and busy and great year. Highlights:
October: enjoying the terrific chef's tasting menu at clarklewis with three friends, putting to rest for good my admittedly ridiculous fear that I wouldn't get amazing meals here; house-hunting with my new friend/realtor; spending a weekend in Seattle and once again vowing to get there more often!
November: going on a hike with women I've known since the first time I moved here; seeing a wide range of local musicians all covering Bruce Springsteen songs at a local venue; continuing house-hunting; making an offer on what would become my house; joining a new book group; having Thanksgiving at a friend's house.
December: eagerly stalking the house I was in contract for, visiting the Bay Area for the first time post-move; traveling home for Christmas on the same flight as my brother.
January: starting the year right with a New Year's Day bike ride; closing on the house; moving in with the help of old friends; starting winter hiking up in Forest Park; having my sister arrive to begin living with me.
February: snowshoeing on Mount Hood; having a rocking housewarming party with friends from near and far!
March: starting the quilt project; visiting Hawaii
April: showing my parents my new house; enjoying another Bay Area visit, this one including an absolutely perfect day in wine country - I felt tangible happiness that day that I can still experience when I remember it.
May: completing the quilt; getting a promotion at work; attending a friend's daughter's first communion; seeing another friend's band play at their very first gig!
June: risking a weekend at the beach with the women in my book group - and having it pay off when the houseful of semi-introverts had a lovely time; hosting a couple of friends from the Bay Area.
July: delivering the quilt to the brides; attending Happy Hours in the Park most of the summer; starting to harvest some garden bounty; picking something like 50 pounds of berries.
August: seeing Pink Martini at an outside concert; starting to consider painting in my house (project has stalled, but we'll get there); finally experiencing Trek in the Park; having a bunch of friends over for a potluck for an out-of-town visitor; having lots of birthday celebrations including three houseguests at once!
September: Enjoying a Festa di Pomodori with friends (about which I have yet to blog); generally appreciating how great life is.

And many happy returns!
Posted by beth at 3:59 PM 0 comments