In last month's Fiscal Friday post I showed a chart of all my accounts. As I explained, my paycheck goes into my account I call day-to-day spending, and I immediately funnel most of it out again. 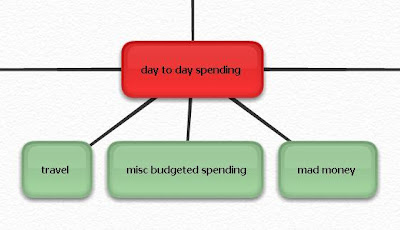 As you can see here, one place I set aside money every paycheck is my travel account. After retirement savings, this might be my highest-priority account, and I certainly manage to spend as much as I save.

I think it's important for me to have a specific pool of money for travel purposes so I can figure out what travel choices work - it's what made it possible for me to go to New Zealand earlier this year on a near-whim, and is what lets me know it's okay to take a week off to go on a road trip, and still know I can plan to go to New Mexico, Honduras and Greece next year - especially if I do manage to work out a free plane ticket to Greece!

However, it also firmly alerts me to the fact that I can not ALSO do some glamorous trip for my 40th birthday later next summer!

And.. it's possible I have a spreadsheet tracking my vacation balance - time has to be budgeted just like money, I'm learning, and while we can make choices to do what we want, so far I'm unable to figure out how to do everything I want every time.
Posted by beth at 8:00 AM 1 comments

Nope, not my wedding! But I have two couples-with-whom-I-am-friends who are getting married next summer. I'm definitely making it to one of the weddings, and I hope to make either the wedding or the party for the other one (the events are being held on different coasts). So, you know, that means when I saw a summery dress on sale, I got it! And now I need to make a little something to go with it.

Here's the dress & the yarn I selected: Pretty good job matching, huh? I know! So then I had to pick out a pattern for some sort of shawl or wrap or shawlette-thingy. I didn't want to do acres of stockinette, and didn't think a super-busy pattern would work well considering how much is already going on with the fabric. I chose Knitty's Annis and have so far had to rip it out completely once. I'm back up to the tricky bit (about 8 rows in, but there are 363 stitches per row!) and have been more careful about putting in a lifeline, and counting the stitches as I go. Fingers crossed I get through it this time!
Posted by beth at 12:01 PM 0 comments

I've missed a few Fridays, what with vacations and all. I've been quiet on the blogging front but be assured there's plenty of turmoil in the background! I'm thinking all manner of Deep Thoughts about life, career, money, happiness, challenge, change - you name it. It kinda sucks, to be honest - but we carry on, right?

So in lieu of a specific Fiscal Friday post, I thought I'd give an update on the Great Plastic Experiment. About a month ago I decided to explore the magic of airline bonus miles and signup incentives, in hopes of getting a free ticket to Greece next summer. I got two cards which will give me 75,000 miles per card on American Airlines, so long as I charge $1500 on each card within the first six months of having them. My travel guru assures me I'm looking at business class travel to Greece! I'm hopeful he's right.

At any rate, the experiment is going swimmingly - my trip was a good for a chunk of expenses that I've already paid off. At this rate I'm going to make the deadline with months to spare. I'm skeptical it could possibly really be that easy.. but it's looking good!
Posted by beth at 3:17 PM 0 comments

Oops. Forgot to post this WIP (work in progress) and now it's a FO (finished object). I made a mini shawl from a pattern called Citron. Here's the starter picture, from Sept 26 It's crazy - you cast on three measly little stitches, then somehow magically get make it grow and grow and grow. And I finished it last night: It's quite a nice effect, though I don't know if I'll actually use the thing. This is the problem with knitting - I enjoy the process, but can't use much of the finished works.
Posted by beth at 10:16 AM 2 comments

Last week I posted the route of my road trip. When we crossed back into California, my friend and I stopped at the well-known and extremely old-school roadside attraction called Trees of Mystery, in Klamath. They've been wowing visitors for over 50 years, and it very much felt like a throwback to earlier times. Visitors are greeted by a 50-foot (15-meter) tall statue of Paul Bunyan (now with a webcam!), and can pay an admission fee to follow a walking trail. In 2001 they joined the modern era by adding an aerial tram. The guy working it said they brought in much of the components via helicopter, so this place really must make some serious money! The view from the top was wonderful. Remember those slippers I was knitting? Done, and done. And both pairs fit. Phew! I had ten whole days away from work, and went on a road trip with a friend from my Boston days, lo those many (14!!) years ago.

We drove a lot, which was especially impressive for her, as she's a New Yorker who's never spent much time driving a stick shift. After a refresher session, she was on her way. We drove from the Bay Area up to Crater Lake, then to Portland, then hit the coast and drove south. Add in some great weather and lovely people, and the vacation was really amazing. I'll post a few more pictures later - gotta give me a way to get back into my blog!
Posted by beth at 2:27 PM 0 comments

Oh, isn't this picture evocative of crisp air and sunshine? I have a little ceramic figure I call the Traveling Dude. He was a gift from a good friend to commemorate a road trip - we left his brethren along the route of our drive from Portland to Rocky Mountain National Park and back in 2003. I wouldn't dream of leaving my Dude anywhere, but I do like to get him in pictures now and then. He's been to Yosemite with me several times; this picture was taken last October. Pro tip: Go to Yosemite on Halloween weekend.. most people tend to stay home!

I can't believe it's been a year since I was last in Yosemite, with no trip planned in the near future. That makes me a little sad. If I choose to focus on the positive, though, I've been there five times since 2006, so I'm doing pretty well. I've climbed great heights (though not Half-Dome, not yet), Lembert Dome, Sept 2006
admired the beauty of a long-abandoned orchard Yosemite on Earth Day 2007
cross-country skiied through TONS of snow (and got to put chains on the car!): February 2008
admired crazy-huge rock formations - this is about the size of a car: North Dome hike, October 2008
and of course, breathed deeply of the fresh clean air (and slept like a log).