Well, I'm still biking, still running a bit. I'm trying to pick out a new bike seat in the midst of all this training - it's daunting to commit to riding five hours on a new seat, without being sure it will be remotely comfortable! And sometimes..it's really not! But a local bike shop has a seat lending library, so I don't have to commit without testing, and that's fantastic. I've managed to get just about 100 miles in on each of the two seats I've tried so far, and I don't think I've found my one true seat yet but the process is pretty great.

According to my gadget, I've biked just shy of 600 miles so far this season. That's great, since my goal before Cycle Oregon is 1,000 (1,200 would be even better). I think I can pretty confidently say I'll get another 400-600 miles in the next five weeks.

The hills will still be brutal, and there's no help for it. Sunday I rode 25 miles in the West Hills: 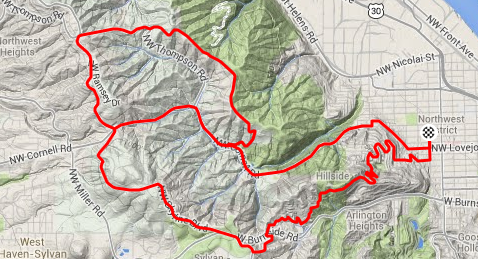 I'm proud of the fact that it's a figure 8. You know what that means? It means we absolutely killed ourselves getting up into the hills (that wiggly bit on the bottom-right was crazy crazy steep), and then we went down some and opted to go back uphill again. Woo! Here's the elevation profile (in meters, but you can see the gist of it):

Brutal. The worst bit was a quarter-mile at a 13% grade. I was in my smallest gear, could barely bring the pedals around, going under 3mph, and I accidentally lifted the front part of the bike right off the ground in my struggle to keep going. Yikes! But hey, it's over now. And that whole ride was 25 miles, 2200 feet of climbing - one-third the mileage and one-third the climbing on the worst days.

I honestly don't know how on earth I'm going to get through that ride in one piece, without sagging. One of my friends has already dropped, but the rest of us are holding firm so far!

The time I: tried a float tank

I have a friend who is raising money so she can go spend two months volunteering on an elephant preserve in South Africa - how cool is that?! A few months ago, she coordinated a fundraising raffle and got lots of good prizes donated. In fact, I donated my cake-baking services as a prize, and the winner claimed it two weeks ago for a coworker's going-away party. She never let me know how the cake was.. hopefully it went over well!

Anyway, in my opinion one of the best things about the raffle was that you could pick from the available prizes if your ticket got drawn. I won very early in the evening, so I chose the gift certificate to a local float tank center.

I know: a what? I'd heard randomly about sensory deprivation float tanks from a friend, who back in the 1990s went on a couple of dates with a guy who had one in his basement. (I found that very weird and Very Portland.) The idea is that the tank has about 10 inches of extremely salty water in it, heated to about body temp, so when you go in and close the door you feel weightless and isolated from the world.

When I lived in Oakland a float tank shop opened near where I lived and I often walked past it - I decided I was intrigued by the idea of a float, but too cheap to shell out for it, even though some of the benefits sound great, like feeling really relaxed,  having an amazing nights' sleep the night following the float, and even getting some meditative insights. So when I saw that a float certificate was an available prize for my winning raffle ticket, I was all over it!

The float center I went to has three styles of tanks: a small open room, a tank that has a lot of head room so you could almost stand up if you wanted to, and a traditional tank you have to squat to get into. The certificate I won was sufficient for three floats, so I decided I'd try all three tank/room types before I was done. Sunday was my first float, and I went in the tank with the head room.

I read Lisa's description of a float at the same center, and it's very accurate - each float tank is in its own room, which has a changing area (that is, an undressing area) and a shower, and then the tank. They give you wax ear plugs to put in, to keep the epsom salt-water out of your ears. There's a dim light on in the room which they tell you to turn off before you get in the tank, and there's a dim light in the tank you can turn off when you're ready. And then.. you float.

At first I felt a little confined by the space (even though it was big) - I think because the air was humid, it felt a little hard to breathe at first. Then, because it was dark and the water and the air and my body were all the same temperature, I realized I really couldn't feel what parts of me was in the water and what parts were floating above - even when I had my hand half-in, half-out, I couldn't feel the difference. Very trippy!

The water was CRAZY buoyant. It was probably waist-high if I sat up, but I was physically unable to sit - I kept floating up to a reclining position when I tried to sit cross-legged in the water. It takes no effort or thought at all to stay on the surface, which was a pretty amazing feeling!

However, mostly I was a little bored. I was already well-rested (since I'd gone on hard bike rides the previous two days and slept like a rock each night) so I don't think I dozed. My mind wasn't racing, exactly, though I did think of a few things to keep on my to-do list. I thought about some blog posts I might write (namely this one, but perhaps some other experiential ones, like the time I went skydiving, or got open-water certified to scuba dive, or moved cross-country on the train), and I thought a tiny bit about my career path (no blazing insights, alas).

For the most part I sloshed around and wondered what time it was. The tub was long enough that I could extend my arms over my head and not touch either my feet or hands to the edge, so I spent time pushing off from one end and gliding to the other, then bouncing back to where I'd started. It's as close to weightlessness as I'm ever likely to get, and I guess if I ever DO get to space I'm going to spend a lot of time gently ping-ponging myself around.

Eventually some music came on to let me know it was time to get out. Then I was a little reluctant to wrap it up, but I do have two more floats left. I felt very relaxed the rest of the day, but I did NOT have an epic nights' sleep - in fact I woke up a couple of times disappointed that my sleep wasn't being amazing!
Posted by beth at 11:11 AM 1 comments