After my trip to Sweden I'm interested in recreating the delicious brown bread I had several times there. I talked a bit about it in a recent post.

I've made two attempts so far, but I'm not there yet! Both were edible, the second more so than the first.

In the first, I used the crazy rose hip meal (or whatever it is) that I brought back. It's ... weird. Very red in color, and very vitamin-C-like in flavor, if that makes sense. I don't think I'm going to use it in further attempts, unless I get a lot closer to the ideal and am in tweaking mode. 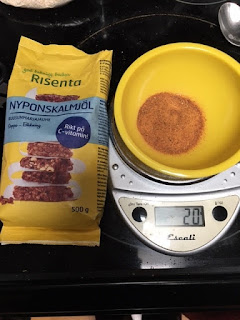 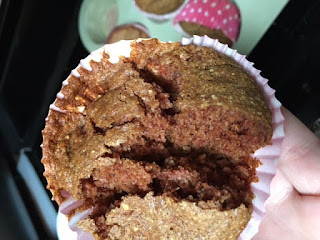 You can see the redness of the meal in the finished product.

The second attempt was better - it tasted pretty good and was rather hearty-seeming: 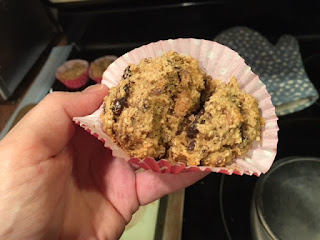 But the attempts so far haven't even BEGUN to match the real thing, or even the photos in the recipes I used. (Here's a link to the recipe I used as a starting point for the first attempt. The second attempt came from The Rye Baker: Classic Breads from Europe & America, which I got from the library)

Obviously I'm not using the right flour, so my next step is to get my hands on dark rye and/or pumpernickel flours. Fortunately I'm in driving distance of Bob's Red Mill - and they sell in bulk, so I can buy a few cups, not a few pounds of flour while I'm in test mode!

One good thing is that I've been scaling these recipes WAY down - I think I calculated them down to an eighth of the original volume. I've been making 3-4 muffins with each attempt. Thank goodness for digital scales and recipes written in grams!

Here's a fly-by upshot:
We had a half-day and then two full days in Stockholm: 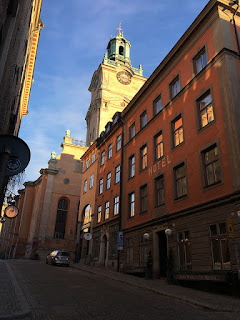 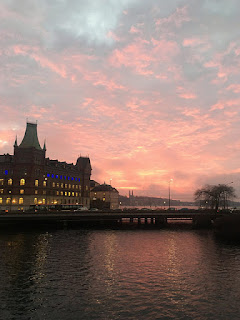 Then we took an overnight train 12 hours north:

And stayed in the OMG WOW TreeHotel - we got the MirrorCube: 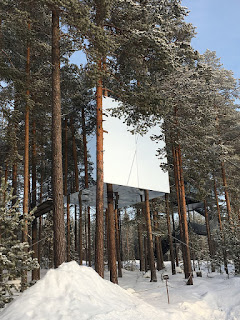 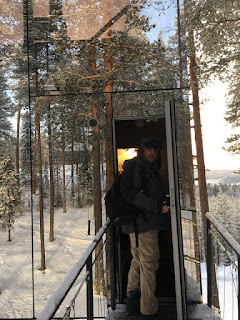 Inside picture, and picture of the on-site sauna: 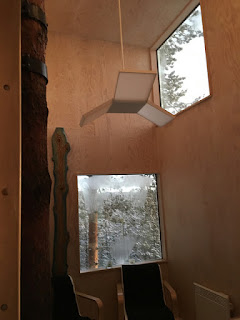 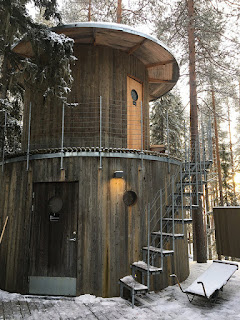 Then we went even further north:

Where we saw Northern Lights (not a great show, unfortunately, though I know it sounds ungrateful), and enjoyed some fresh air as we hiked around a little: 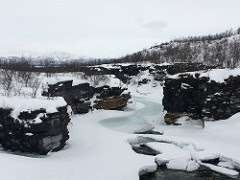 And finally, we went to the Ice Hotel which was as amazing and crazy as it sounds. It's built every fall and is gone - melted! - by May. Since it's so popular they've now built IceHotel 365 which will use solar power to generate a cooling system and keep the rooms below freezing year-round. 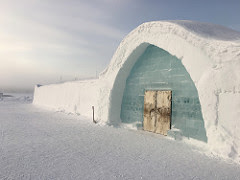 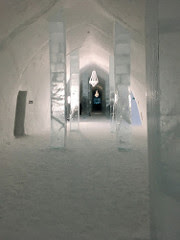 Our room - brrrrrrr! Though the sleeping bags were quite snug: 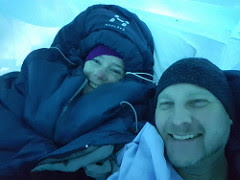 Finally, we returned to Stockholm for some final walking-about, great meal, and final night.

In general, Sweden is very easy to visit - everyone speaks terrific English, the exchange rate was decent at this time (apparently not usually the case), and the food was amazing. Here are some final food shots: 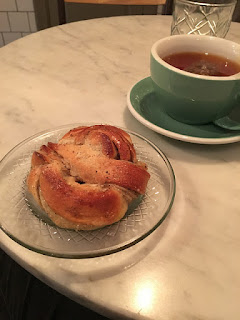 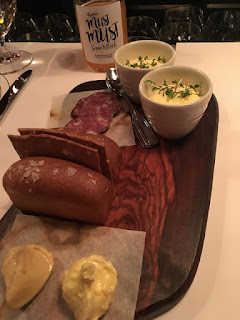 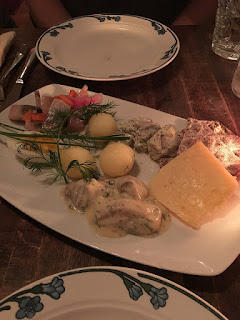 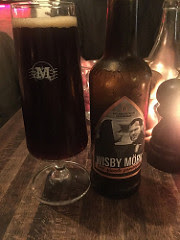 Sweden was awesome! No surprise, I suppose, since it WAS vacation after all. It's a great place to visit - everyone spoke excellent English, it was easy to get around, heck, my cell phone even got data service there! (Thanks, provider!)

One thing I loved was the breakfast buffets - lots of delicious food, usually included in your lodging cost. My boyfriend and I would usually eat a hearty breakfast, skip lunch, have a late afternoon snack and then have dinner.

I have come back vowing to recreate the bread I found at every breakfast offering. It's dark, but not dry or heavy. It's got some nuts or seeds in it but no heavy flavoring. I've found some recipes that call for orange or anise or fennel and I'm certain the ones I had didn't have those elements - some posts hint that's a Christmas-related flavoring choice. 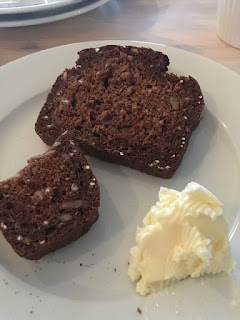 At one place I cleverly took a picture of the label, so I would know the ingredients involved when looking for recipes. 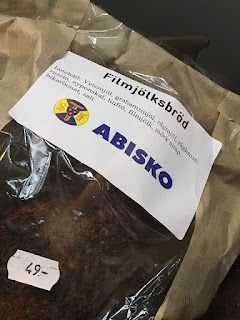 The above label indicates it's bread made with filmjölk, or sour milk. I have a friend in Sweden (who we didn't get to see) who tells me it's sort of like a cross between buttermilk and yogurt; they always have it on hand for their kids to drink. He even made a little video as he poured it into a glass so I could get a sense of its density!

I've tracked down some recipes for "sour milk bread" and also found this post for so-called Kavring, or dark rye bread. It calls for plain yogurt and a little milk or cream if the dough is too thick, so I think that is her attempt at substituting for the sour milk ingredient used in Sweden.

There are two more odd ingredients on that label: one is mörk sirap - aka dark syrup. Apparently it's kinda like dark corn syrup, sorta like molasses crossed with light syrup.. on that I took no chances. I bought a bottle and brought it home.

The final mystery ingredient is nyponskal. Here, I'm sorry to say, the internet has not been helpful, nor has my friend. The best I can find that this is rosehip husk... it can be used in soup. I'm thinking it's kind of a ... bran-like thing? Anyway I bought a bag of what seems to be rosehip meal.. so I will try that and see if it works.

I'm going to construct a recipe that mainly follows the Kavring one but has some additional elements, and will sub in my best guess at the Swedish-specific options.

Well it's been a while! I'm resurrecting this blog because on Friday I'm heading to Sweden for a week and putting stuff up on social media is fun for the likes, but isn't easy to look back at later. I don't know if I will REALLY update this every day, but I might.


What else is going on with me?
Job: I'm five months into my new job and it's still feeling pretty good. I took a month off between jobs (which was SO GREAT) and then was in training for pretty much the entire rest of 2016 (which is an astonishing investment for a company to make). I'm actually/finally now going fully live on doing my job and it's a lot to juggle but so far I am very happy I made a change.

Fitness: this fell apart. I did summit South Sister with friends in August, and it was so hard - 13 hours of hiking because it was a LOT of very steep up and down, and I'm slow. But my running practice ground to a halt and hasn't been replaced by anything. I have intentions of getting back into it if we ever see the ground again.

Snow! We get snow here in the Pacific Northwest every now and then but we got about 8 inches a week ago and it's just lingering. It's been temps in the 20s, we don't have plows, ice and snow still all over the side streets.. I haven't been in a car since last Tuesday, and I ventured out on foot last Thursday night and on Saturday afternoon - that's been the extent of it!

The state of the world: big enormous panicked grump. Trying to focus on the good, learning how to use my voice politically. Very sad I'm going to miss all the amazing energy of the political protest march here in town on Saturday - I think it would be enormously uplifting. Stockholm is hosting a march that day as well, but I don't know if we will get there in time to participate.

January challenge: For the weeks between Christmas and Sweden, I've done a challenge to have no sugar/no alcohol/no restaurants. Part of this is health-related, part of it is financial: I think by spending NO money (except on groceries and doing some political activism), I will balance the spending in Sweden and come in okay for the month's total.

On the plus side: Cutest niece ever. Knitting some more. Cooking a lot of good food.
Posted by beth at 11:21 AM 0 comments