So far I've managed to keep running this winter. Sure, it's only January, but I was really worried I'd return to my lazy/inert days of yore and stop exercising. That hasn't happened, but it HAS been a bit of a struggle lately to get myself out there.

I think if I step back from my feelings and look at the facts, I'm actually doing okay:
Okay, that really did help. Yeah, I'm tired, and yeah, I have been running out of energy/motivation/willpower mid-run. I think I need to change up some of my fueling choices, and I also need to be patient - that I'm running at all in these chilly days is huge. High five, me! (And keep it up - that 5k looms!)
Posted by beth at 4:49 PM 1 comments

I've had money on my mind lately.

A friend volunteered to cut her hours to halftime, but only after the fact did she crunch the numbers and realize that means she's now running in the red by a few hundred dollars every month. I haven't seen the numbers she used - I hope and assume there's some room for belt-tightening to make it work, but I don't want to stress her by asking. I may broach it in a few weeks, very very gently.

However, her situation inspired some number-crunching, and I'm  happy to say I feel absolutely certain that I could get by on half my income, but it wouldn't be fun or pretty. I've also got enough in savings that I could support myself for eight months, which is a good solid feeling to have.

AND - there's lots of room for improvement in my fiscal life. I just looked at all my spending and saving last year. I saved 16% pre-tax for retirement, and saved 19.5% post-tax. Not bad, you say? Well, it's true but I could do a lot better. Most of my post-tax saving was from various bonuses, contract work, my tax return, and other non-work income. If I just look at what I earned vs what I spent each month, I saved 5.6% - meaning 14% of my savings came from sources of income I can't count on next year!

Travel was what killed me (and thrilled me!) the most last year - 16% of my post-tax income went to that. So... I guess that's the biggest place to focus for savings this year! Here's how my numbers broke out:

Some of my categories have crossover: is running gear for health or for hobby or for clothing? Is a framed picture household or house? How about a ladder? I just try to be consistent - the art is household (since I'd have paid for it whether or not I owned a house) but the ladder is house (as a renter I wouldn't own one). So far I've slotted running gear into clothing, but as I buy extras that are beyond the bare minimum, I'll probably put them into hobby spending. Registration fees for 5k events will be hobby for sure. If I needed physical therapy, it would be health/upkeep.

The best spots for trimming spending and boosting saving are travel (16%!) and food (when I combine eating out + grocery I see I spent nearly 12% of my income there). Funny that they are the fun ones. We'll see how it goes!
Posted by beth at 12:05 PM 1 comments

I just realized that tomorrow is two years exactly since I moved into my house! Saturday was two years exactly since I wired a whole lot of money and signed a whole lot of papers. I'm so glad that process is behind me, and that my house continues to be delightful. It's more than enough room, is great for hosting visitors, and is so quiet and light-filled and there's very little about it I would change (I would add a half-bathroom and make the bedrooms a bit bigger..but there are no deal-breakers).

I've even done a few projects lately - I fixed a paint job (I'd used the not-quite-right color when doing a patch job), and I added key and bike storage!

Key storage was easy, and I did it all on my own. I wanted to sort out the thicket of spare keys that lived in my junk drawer: 7 keys to four different bike locks, three keys & a remote to my sister's car & apartment, a key to a friend's house, a spare key to my back door, and my front door key. Crazy!

I spent a little time looking for key organizers, and then decided that the answer was staring me in the face - the inside door of my broom closet + sticker-hooks. Voila! 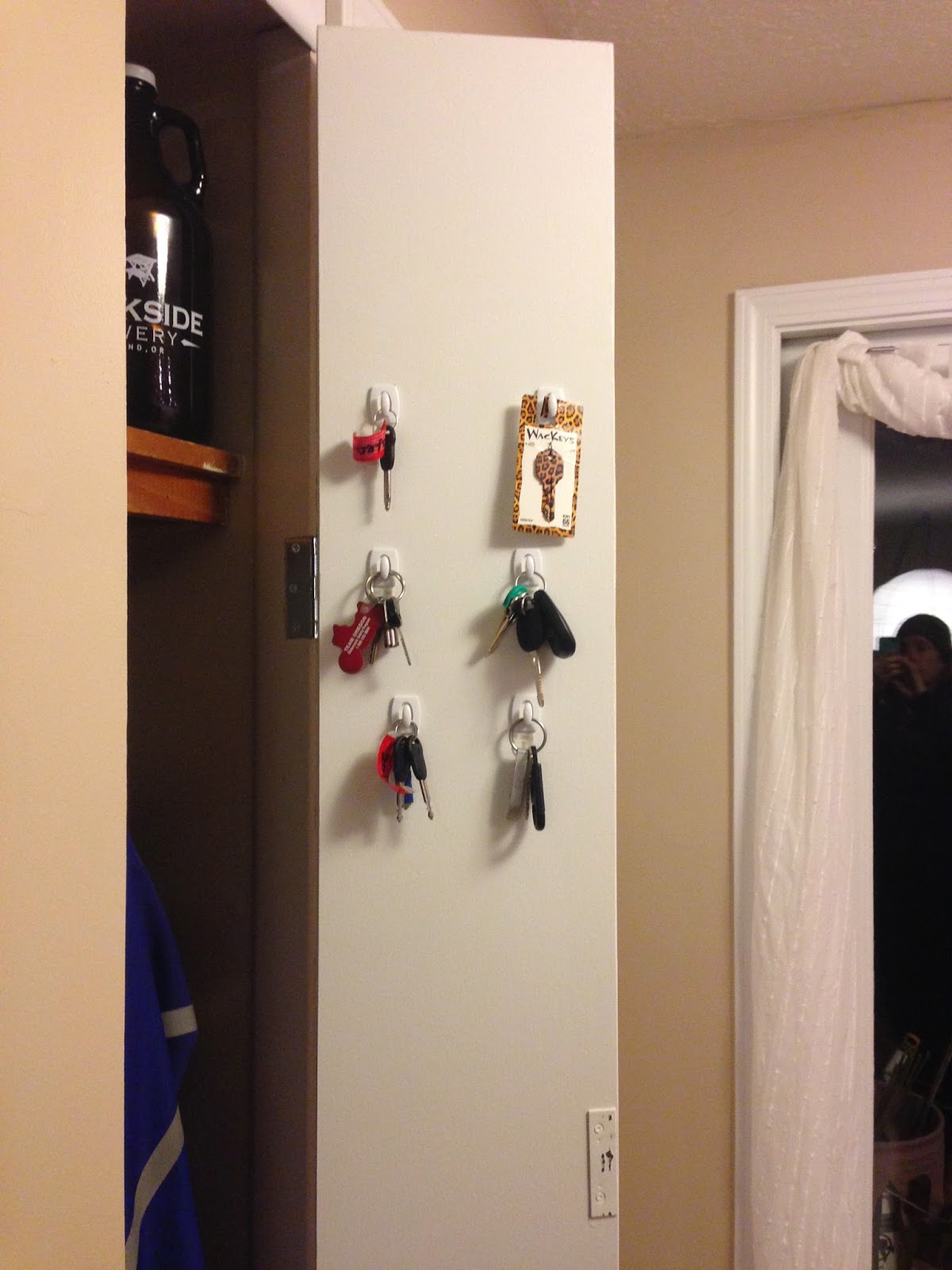 Yeah, they're crooked, and yeah, I meant for them to line up better. Oh well. I'm still happy with the decision!

The other project required help from friends. I'm providing long-term bike storage for a couple of friends, and those bikes were IN THE WAY. Though getting rid of my car did help clear a lot of space in the garage.. but still. My friends installed one ceiling-mounted bike hanger as a surprise over Christmas, and we added a second one yesterday. It looks so so great: 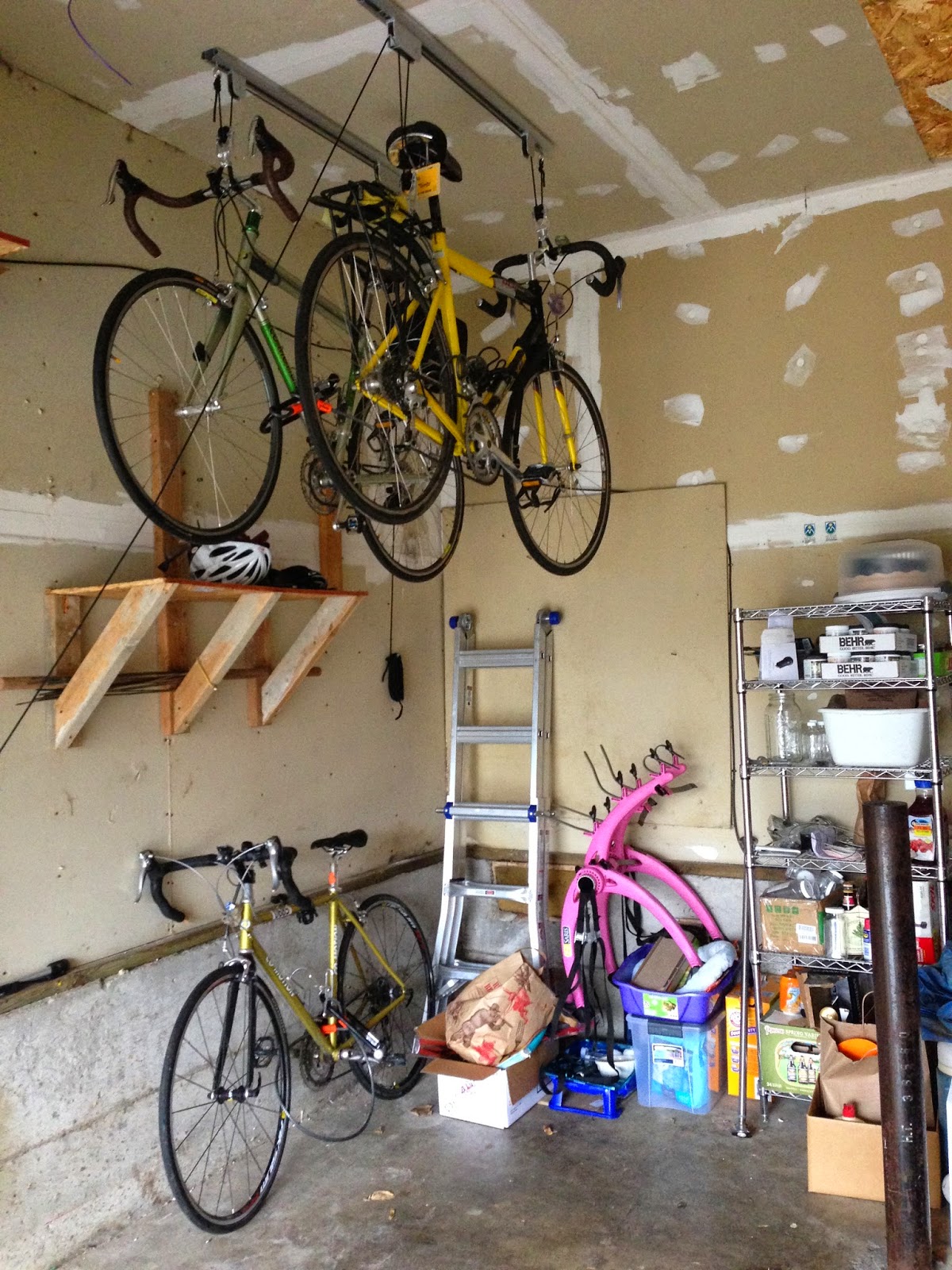 I can walk under the bikes without hitting my head, they'll still be out of the way when I have a car in the garage, and we also did some other little garage projects: put some boxes up out of the way, tightened the punch-code remote that triggers the garage door from outside, and installed hooks to hang my hoses. Goodness, it was so awesome!

There are lots of other non-pressing items on my house list. My yard is an extremely slow-motion project, without a master plan. I want to have a deck built and am saving slowly for that - at my current pace I will have the money in another 2-and-a-bit years. That's not so bad, really: it could be completed by the time I've been in here 5 years. I'd like to remove/possibly replace the front chain link fence; the wood fence around the back is rickety and will have to be fixed eventually. When the deck goes in I'll have to move two of my three garden beds (to the back where there is a LOT of direct sun). I want to print and hang more of my photos, and change the light fixtures, and swap out the kitchen sink, and gut and refurnish my office ..

So yeah. Happy two years, house! No wonder the time has been flying!
Posted by beth at 2:21 PM 0 comments

No doubt about it, 2014 was a great year! I was midway through being 42, and everyone knows that year is considered the answer to the life, the universe, and everything. I felt empowered & ready to make some changes, like fixing a cosmetic dental issue that had been bugging me for years, getting fitter, and dropping some weight. Pictures are a much more pleasant experience now!

I work from home and I took advantage of that flexibility to spend a couple weeks in Toronto visiting my best friend - sure, February in Toronto is COLD but we also drove a couple hours' north to spend a weekend with a bunch of friends crammed into a three-bedroom house playing games, eating food, and hanging out. This fall I worked remotely for a week from my brother's place in Hawaii - it was nice that he and his wife could work, and I could work, and then we could socialize on the nights and weekends. I also did a combo work/play trip to Detroit/Toronto in the spring. 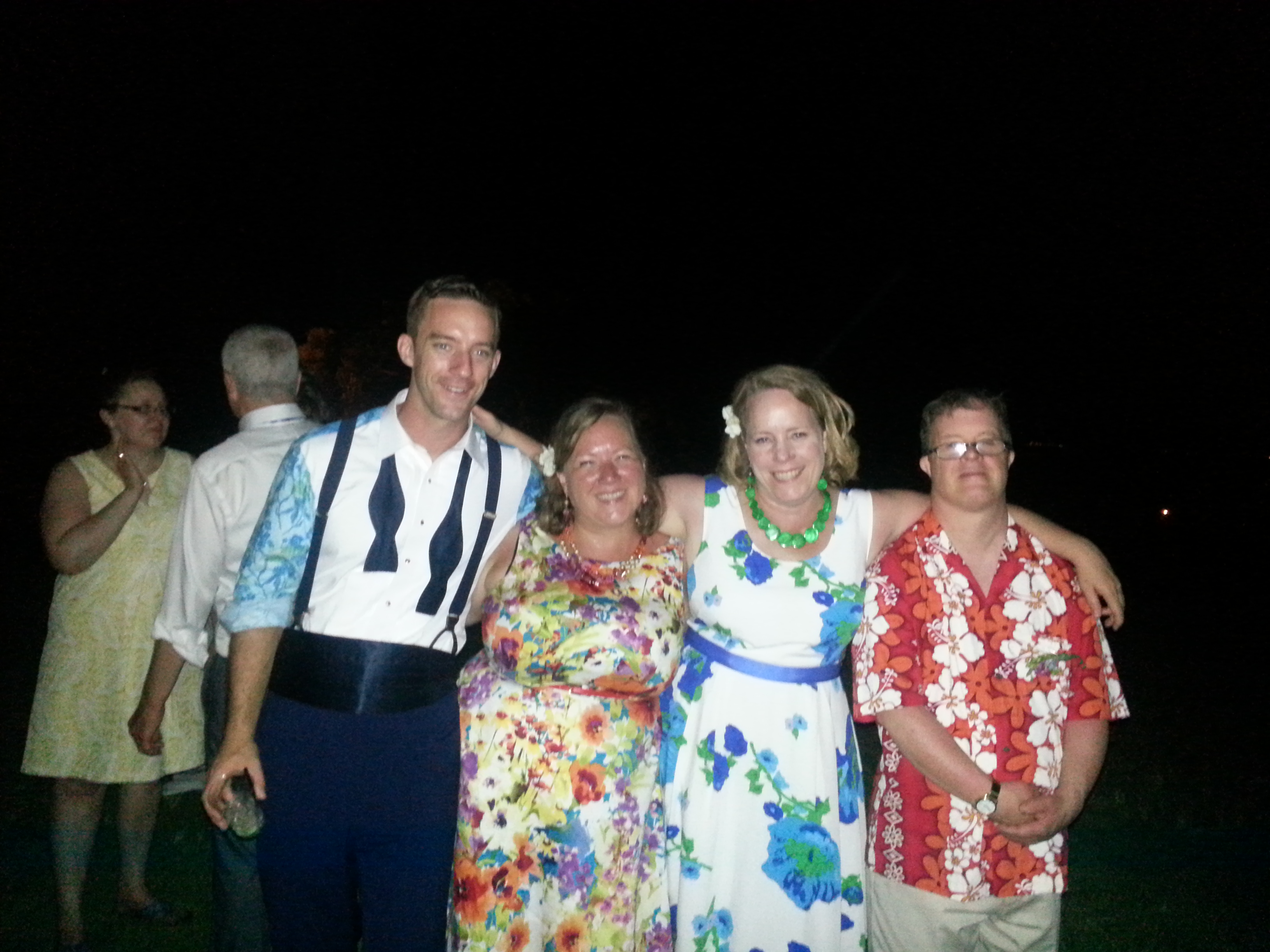 Me and my siblings at the wedding.

I did a lot of non-work travel, too: I spent two weeks in Hawaii in the early summer for my brother's (awesome) wedding AND I spent a week biking in September AND I spent a week in the Dominican Republic AND I went to plays in Ashland on two different weekends. But that's not all! I also spent a long weekend at a friend's epic birthday party, and a quick weekend in Nashville at a family reunion, AND went to the Bay Area three times (twice for work, once for play) AND spent ten days in Rhode Island for Christmas (two days of which I worked). 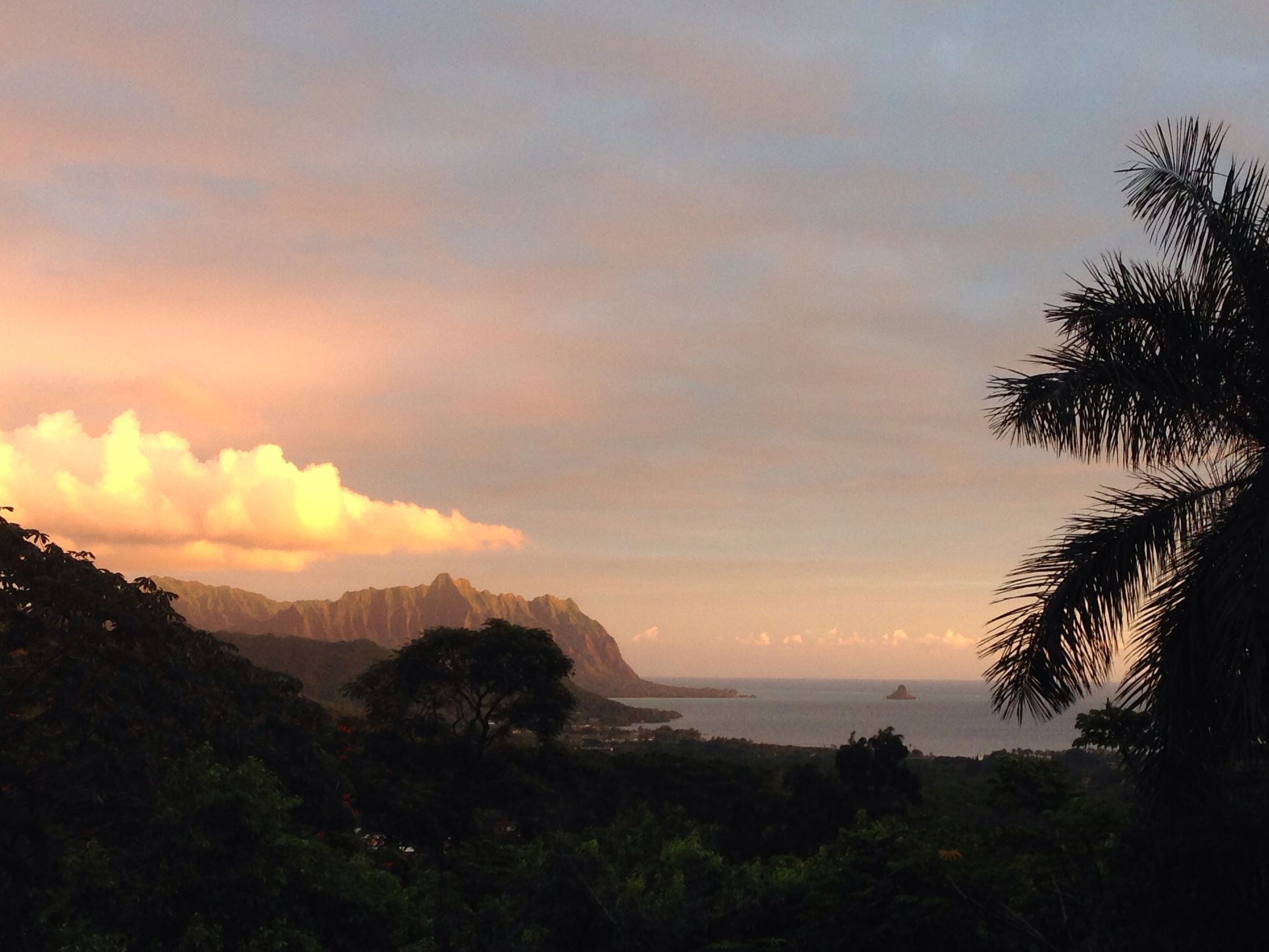 Sunrise in Hawaii, while I was working. 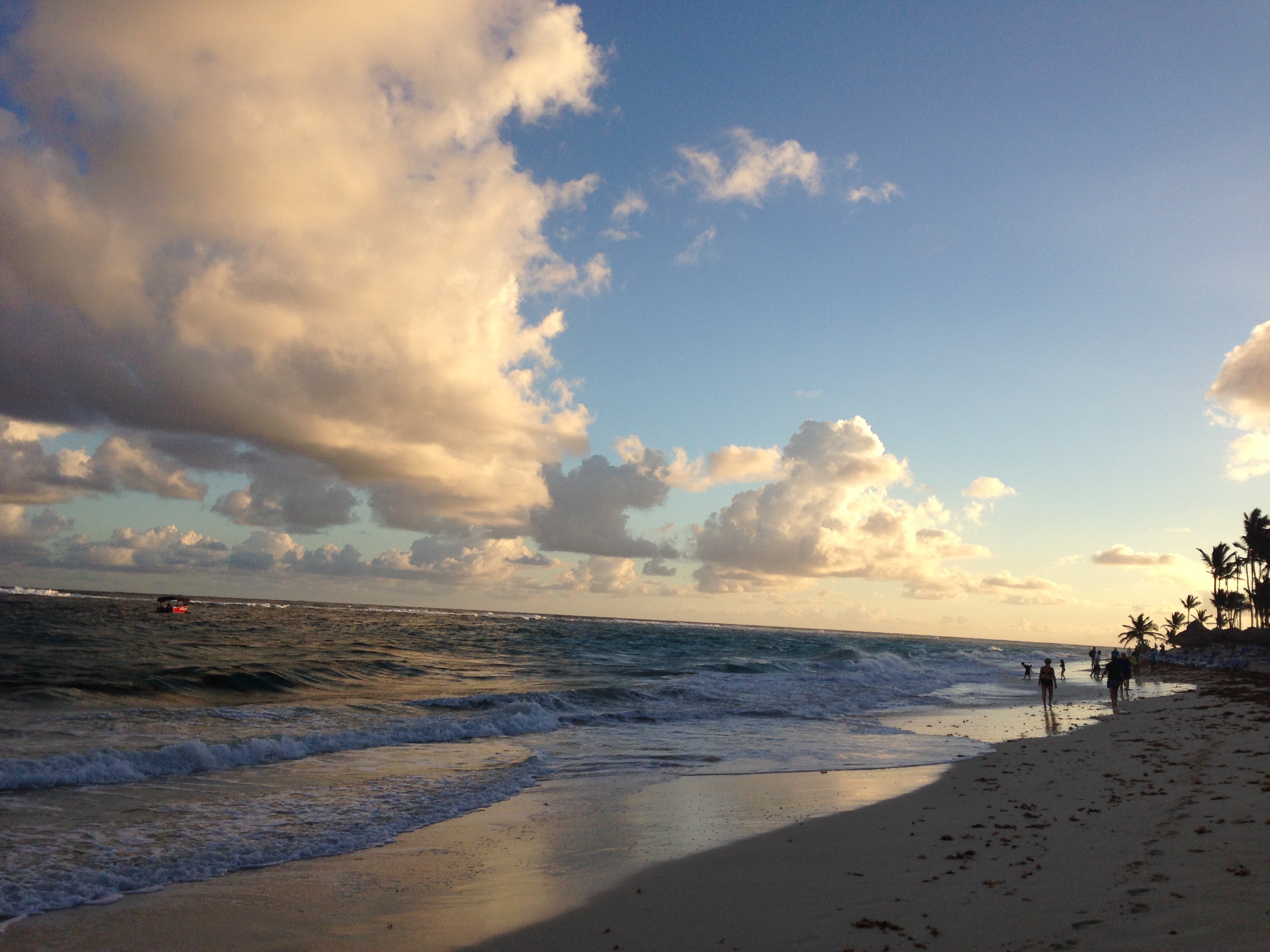 Sunrise in the Dominican Republic - strictly play, this time.

Fortunately, I only paid full price for the holiday travel - three of my trips were work-related, and the six other flights were all paid for with miles and points. High five! However - for those counting, that's 10 flights this year, three road trips, and one bike trip. WHEW. 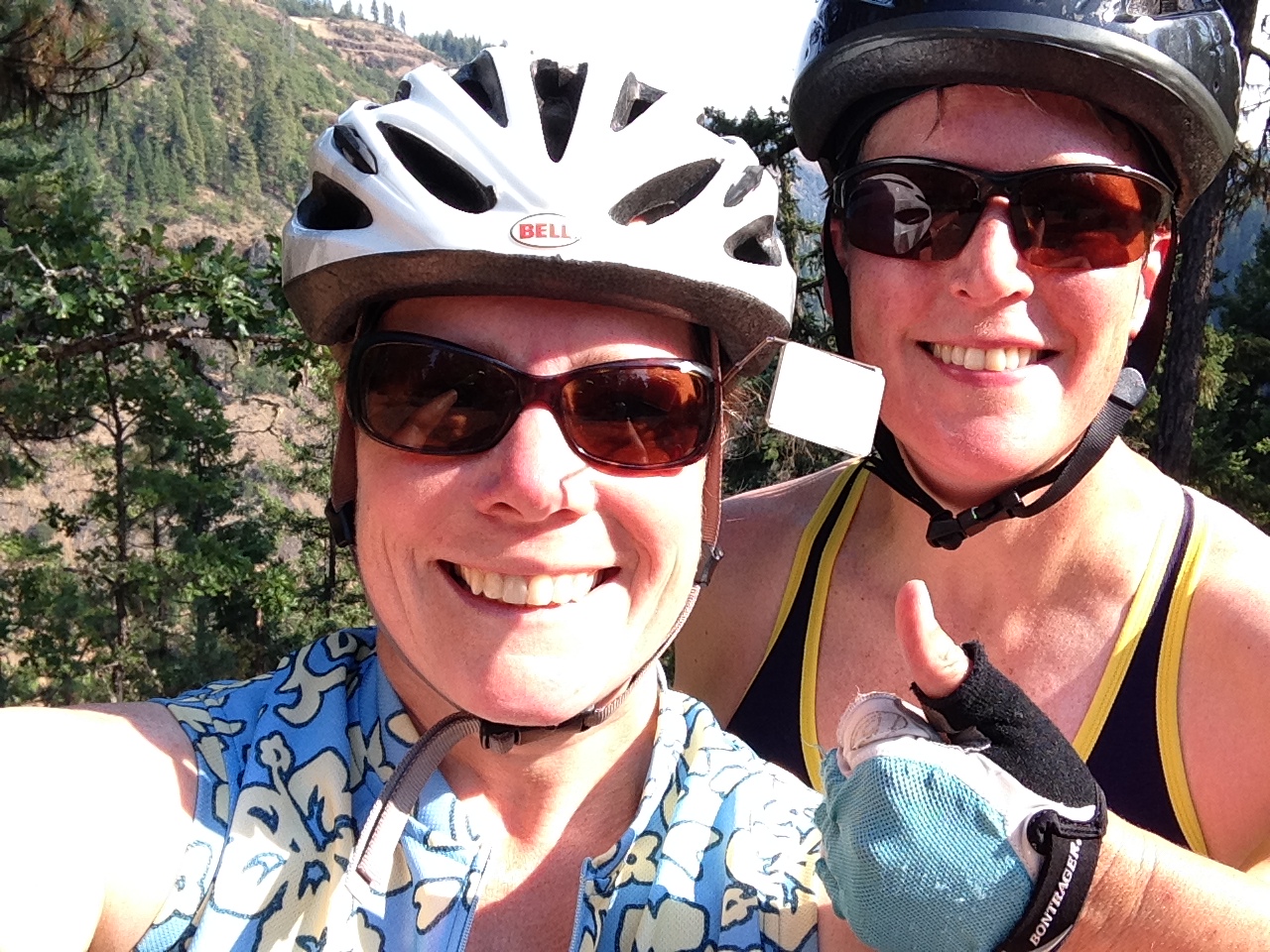 On the first day of Cycle Oregon.

I also had several house guests (and one came to visit three times - oh, the charms of my fair city - but is a very good guest so that wasn't a problem), maintained membership in two book groups, ran 116 miles, biked 1641, and ...did not track my walking. As far as I can recall I have not been sick a single time this year - that is largely due to working at home, I suspect - and I mostly feel really great.

Career-wise I've sort of plateaued lately, though I was handed some new responsibilities at the end of the year which are pushing me a little outside my comfort zone and are giving me resume fodder.

Hobby-wise I kept knitting, obviously amped up the fitness, and of course I ate out plenty (if that can be considered a hobby!).

Fiscally, things are decent. I do have to deal with that whole no-car thing, but it hasn't been pressing yet, and may not be any time soon! I'm saving 16% of my salary (with a 4% match) for retirement, and have started making house-payoff plans (that will bear fruit in 2030 or later). I've been saving for a deck but it'll still be quite a while before I have enough saved, unless I get a thwacking raise or a roommate - equally unlikely at this point.

The only real lacks in my life are volunteering and having an awesome boyfriend. I can definitely do something about the former, and I keep figuring I'm going to live an awesome life and hopefully the latter will show up eventually - and if not, well, I regret nothing!
Posted by beth at 3:16 PM 2 comments