This weekend was super busy. On Saturday I rode 55 miles on my bicycle as part of an organized event called Reach the Beach. I rode this several times in the early 2000s and it's always been my favorite ride. For the most part, it's super beautiful, and it's very well organized with rest stops every 12-15 miles. May can be a risky time to do a bike ride in Oregon, but we got crazy lucky with the weather this time! 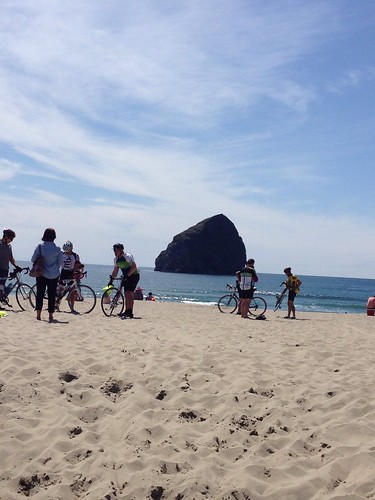 Saturday at the coast
I was riding with a friend who's been dealing with a pretty big range of life, work, and medical issues, so she didn't have a lot of energy and hadn't been able to ride much lately. She tried so so so hard and managed to ride 40 miles. She decided to stop at the third rest stop, since she'd been reduced to stopping every mile to try to gather some energy. I felt badly for her but agreed it was definitely the right call!

That left me to do the final 15 miles solo, but I didn't mind very much. At least it was sunny and warm, not rainy and cold like it's been on previous rides! There are some stretches of really hideous headwind in that final leg of the ride, and my butt and legs were sore from already being on the bike nearly 5 hours, but I dug out my last bits of energy and actually finished the last leg in 75 minutes, which was quicker than I'd estimated. It remains clear I have a LONG way to go before Cycle Oregon. 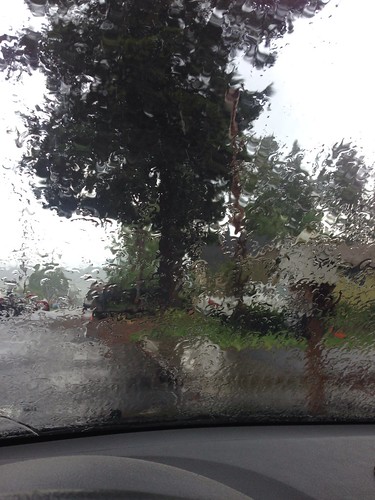 Sunday at the work party
Yesterday I spent three hours on a work crew in that same friend's yard - for the same pile of life, work, medical issues, her massive yard has gotten well and truly out of hand. About ten of us turned out and spent time in the cloudy rainy day taming that land! It's more yardwork than I've even done at my place! I didn't mind working in the rain at all - way better than biking in it!
Posted by beth at 11:47 AM 0 comments

Links to this post
Labels: 2014, biking, fitness, may, oregon, Portland

I've been a cyclist for a long time - I was fortunate enough to work with biking-obsessed friends in the late 90s, and they pulled me along into that world. I certainly have many years of relatively few miles, but this year will be more high-mileage as I train for and ride in Cycle Oregon in September. Including the 400 miles ridden during that week, I should do more than 1500 this year - one of my highest-mileage years! 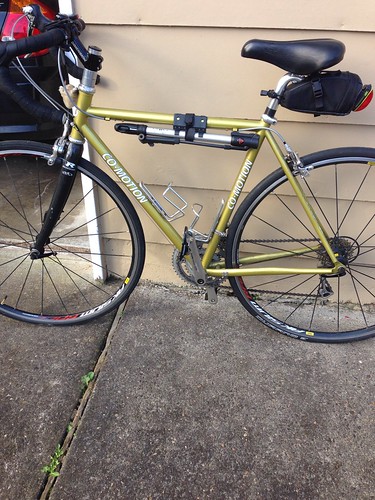 I've already been training some this year, though I've also been a bit busy. I'm doing a 55-mile organized ride this weekend which may be interesting, as my longest ride so far was a few weeks ago and was 30 miles. So.. we'll see. It's my favorite ride, I'll be with a friend, the weather looks acceptable, and we can take lots of breaks if we need to!

But I'll admit, Cycle Oregon has me worried. Add to that the fact I have lots of weekends when I will not be in town, and only some of them will be road trips where I can bring my bike... I've got to do something else to help increase my fitness!

Enter: running. I've never run before (I like to joke that I run when chased) but it's appealing in its simplicity - strap on the shoes and head out! However, like so many things in this life, I'm finding that it's not quite as simple as that. I've been following the Couch to 5k program and completed week 3 on Saturday. Just as I hoped, I did two of the workouts while traveling for work. However, apparently it's not right if your lower legs are on fire while running, so today I got fitted for different shoes. I'm hoping this will make it easier and more enjoyable! I haven't minded the time at the track, and I get a kick out of watching the insanely fit and speedy teenagers who are there working on various skills with their coaches. I don't really know how to figure out pace and form, but I think the most important part is to learn to run without my legs aching after thirty seconds - I can worry about technique after that.

Finally, because I'm not being complicated enough, I've started doing a little bit of lap swimming. Wow is that good exercise - my app that I use says 30 minutes of swimming is about 500 calories, vs about 200 for my slow run/walk or about 300 for my non-speedy biking. Not that I actually swim continuously for 30 minutes, mind you! But I can do a full lap, stop and breathe, and then do another. I'm almost always doing the breast stroke with some side stroke or crawl mixed in.

Right now my biggest problem is figuring out when to do all the activity! Since I'm so new at it, I always want to run on fresh legs, so I can't do it after any volume of biking. Biking is most important because of Cycle O. Swimming is a good rainy-day exercise, but we're moving into our better weather. I ought to be running 3x/week, but it's already having to slide a little for cycling. I'm mostly going to do the best I can and take it from there.

I'll be in Hawaii for two weeks in a little while, and will definitely continue the running and swimming - I already found a community pool a mile from where I'll be staying that offers lap swimming, and perhaps I'll get to test that theory about the simplicity of running. September is coming! Gotta be fit!
Posted by beth at 1:43 PM 0 comments