February is, as we all know, the shortest month, although this year we get a 29th (and my friend Karen gets a birthday!). I'm toying with the idea of going vegan for the month. Or mostly vegan. Or something. I would make exceptions for my wine group dinner, and possibly for the cream in my coffee. And I am not at all sure I can make it three days, never mind 29. But that's what I'm thinking about doing. Is that nuts? (ha.. the vegan jokes are flowing already)

I've been uninspired in my kitchen, so perhaps adding some constraints will force me to be creative. I've already picked out a handful of recipes to try out, because I'll HAVE to do something to keep it fun.
Posted by beth at 2:33 PM 4 comments I'm quite proud of this picture! I'm not the most technically proficient photographer, but I did learn how to control my shutter speed. In a situation like this if you leave the shutter open longer than it would choose to be, you get to see the path of the fire that the dancer is spinning about her body, illuminating her but leaving her mysteriously hidden. My friends had these fire dancers come as a surprise entertainment element for their beach wedding in Honduras, and I cursed myself for not having my camera on hand. So I was delighted a few nights later to encounter the same dancers doing a show for the tourists on the beach. I took approximately ten billion photos! I helped organize a memorial for a friend today - she was sick for a long time, and her family will have a formal service for her later in the month a few hours from here. But we wanted to do something locally for the people who knew and loved her.

Jess didn't always have a lot of energy, but in 2009/2010 she put together a blog focusing on the cupcakes she created. It was called Have Another Cupcake which was so apt! It was sheer torture to see the plate of cupcakes at her desk, and I bet few people had only one.

When we were planning the memorial several of us said we'd bring cupcakes, and I picked her When the Levee Breaks cupcakes. She was following the Iron Cupcake SF group, and around that time they chose music as a theme. You can read the rest of the story on her blog post with the recipe.

These pictures are of the assembly - I'd already made cupcakes, chocolate pudding, chocolate buttercream frosting, and chocolate cookie crumbs. (Jess didn't supply a frosting recipe so I used one from Joy the Baker.) To get the pudding in the cupcake, you cut a cone out of each cupcake, and fill the hole with pudding. Then you trim the pointy bit off the cone (converting it into a cap!) and cover up the pudding. Finally, you frost. Holy moly, amateur alert! I'd never tried doing anything fancy with the frosting bag & tips I got for my birthday. I have a LOT to learn about frosting. Some strategically sprinkled crumbs helped quite a bit: And, of course, they were eaten with alacrity. There were four types of cupcake on offer so I think Jessica would have been pleased! 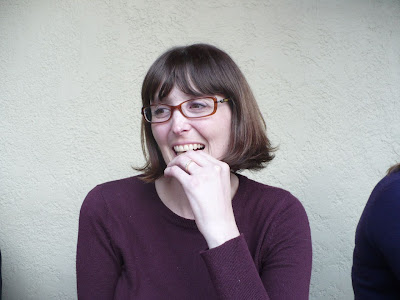 Thanks Jess. We had a party for you today.
Posted by beth at 6:34 PM 1 comments

I discovered tasty, tasty goodness this year in the form of gougères! They seem to be all the rage in blog-land - even though I "only" subscribe to 27 food blogs (*blush*), I saw at least three recipes posted in the last month.

My first time through, I made the gougères using the ingredients from one blog post, and using some of the tips from another one. The results were tasty and appreciated - I brought some to a harvest party and some to Thanksgiving.

Recently I tried a slightly different recipe, with equally tasty results. It's a rather interesting technique: you boil  liquids and butter on the stovetop, add flour, and stir like a maniac. After the batter cools a little, you add eggs, then cheese. The result is a smooth, gooey batter. You can blop it or pipe it onto a cookie sheet - the ones in this picture are so close together because they're headed to the freezer. The finished product is puffy, a bit salty (perhaps too much so, this time, but I expect forgiveness!), and entirely delicious. They're also not supposed to deflate like mine have, but I think the batter is too damp, based on some of the pictures I've seen online. I guess I just need more practice! I really love that you can freeze them unbaked, and then put them straight into the oven without thawing them. I plan to use some of the ones in my freezer over the next week or so!
Posted by beth at 11:31 AM 0 comments