Well, I'm back in town after two absolutely terrific weeks in Hawaii! The highlight (of course!) was my brother's wedding, which was SO lovely and SO fun and just perfect in every way. It was fun getting dressed up in a really pretty dress, I liked all the people I got to meet, and the rental house I shared with family & friends on Oahu was just terrific. After the wedding week I spent nearly a week on Kauai with friends and that was also great. 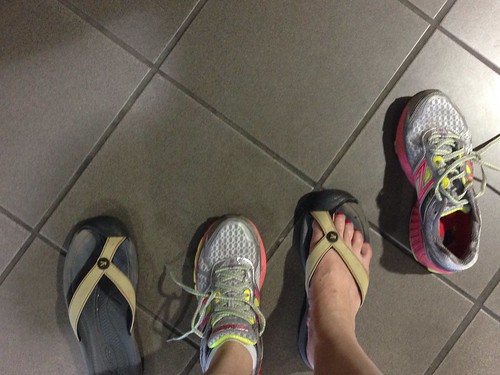 But now I'm back and fitness is the name of the game. I ate pretty healthily and swam a lot on my trip, but only tried running twice and it was pretty close to a failure both times. I was in theory on week 5 of Couch to 5k and just couldn't make it through either workout I tried. So, I'm going to have to roll back the calendar and ramp up again.

I'm signed up for a 7k on Saturday August 9th. I already know it's wildly unlikely I'll run the whole thing, but I have eight weeks to prep for it. I can't seem to fit a week of c5k training into a calendar week, but I think I'll start at either week 2 or 3 and just do my best to fit in what I can.

More important is the bike riding. I returned from my trip on Friday night and hit the road both Saturday and Sunday this weekend. Saturday I did some hill riding - any route with a street named Skyline in it is going to be hilly! We rode 20 miles and did about 2500 feet of climbing. I didn't do too badly (or my friends were struggling more than I was...) and I attribute my relative strength to the running. However, Sunday my buddy and I did 35 miles of flat and I was just. not. feeling it. I got a flat at mile 6, and struggled to settle into the ride for the rest of the time we were out there. My friend was doing better than I was, but we were both feeling pretty whipped by the end of the ride.

When my alarm went off Monday I had no idea where I was or why I was getting up! I guess it was a triple whammy of jet lag, vacation ending, and sheer exhaustion from the biking. But, onward and upward from here!
Posted by beth at 12:09 PM