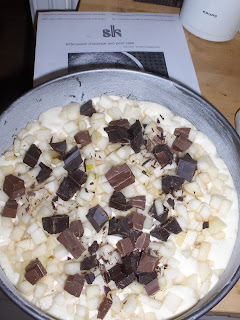 I'm having trouble getting pictures to work with this software/blogging tool. If I don't mind going gray and dying a quiet death, I can upload pics one at a time and it usually works. If I want to, I don't know, use a picture from my web album, I appear to be out of luck. I've got some drafts going, but until I can figure this out, the blog will be more wordy than I want. I'm really aggravated.

But I will give you some of the pictures I managed to get uploaded, after waiting for thirty seconds for each one. Even though I'd already uploaded them to the same album!!! I am losing the war against bitterness!

Anyway: These are from the Smitten Kitchen recipe for Bittersweet Chocolate and Pear cake. Run, do not walk, to your kitchen to make it. I was worried because the commenters had problems with the cake coming out underdone. I should have put foil on it at the 45 minute mark and left it in for 10 more minutes; instead I pulled it out at 50 min so it's a bit brown on top and was a wee bit underdone in the middle - just softness instead of crumble.

But this cake is magic. First all you smell is the melting chocolate, then the cake puffs up around the chocolate and pear, and then you smell sweet vanilla cake baking. Wow. 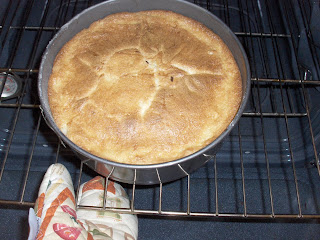